Thunnus Maccoyii shouldn’t be confused with the Albacore Tuna (Thunnus Alalunga) which has a narrower head and much longer dorsal fin. Albacore tuna are mostly consumed by humans via the brands of canned tuna available for consumption. A picture of the difference can be seen below. 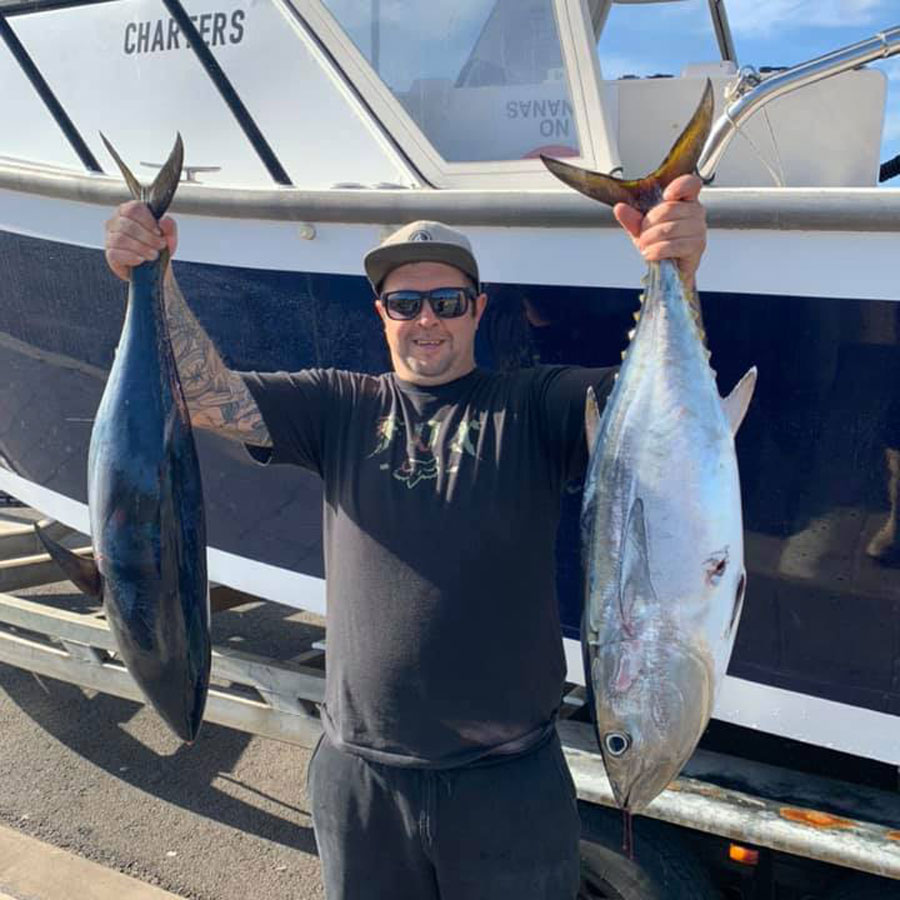 The fish can range in size but it is rare to find specimens above 100kgs and over 2m in length. The majority of fish caught recreationally are between 0.5m and 1m in length typically weighing 12-25kg. Most of the larger sized tuna have been targeted by commercial fisherman due to their high value so the dominant size is a lot smaller. Large tuna are often referred to as ‘Barels’ and can weigh in excess of 400kgs. The largest we have caught is 137kg!

The best time of year to fish for Bluefin Tuna is between the months of March and July when this migratory fish makes its way from the Indian Ocean spawning grounds and around the southern waters of Australia. Tasmania and New Zealand also have charter operators who target this fish around their respective coastlines. A great map of their territory can be found here. Usually by April, the main school passes by Portland which is why we start charters around that time.

Conservation of the bluefin tuna in Australia

Catch limits worldwide are regulated by a central body, The Commission for the Conservation of the Southern Bluefin Tuna (CCSBT).  Australia uses a combination of hard-line and purse seine methods for commercial fishing. Recreation fishing only accounts for a fraction of the amount fished in our waters commercially (less than 5%). Strict bag limits (currently 2 per person per day) and tight regulation of operators helps conserve this fish for future generations. We have often bagged-out early in the day and spent the rest of our charters catching and releasing.

More information on conservation can be found here at CCSBT’s

What is the diet of bluefin tuna?

Because the Bluefin Tuna is a pelagic piscivore its diet primarily consists of other fish (pilchards, saurys etc) but they also favour squid and krill depending on their size. Tuna have also been known to filter plankton as well as kelp.

We can’t reveal all our secrets but we have had a lot of success with a range of lures.  Steve the skipper knows all the best spots and techniques to catch this fish so you can sit back and trust in the team to give you the best chance at catching that monster! Due to popular demand we have some basic fishing tips for you here. 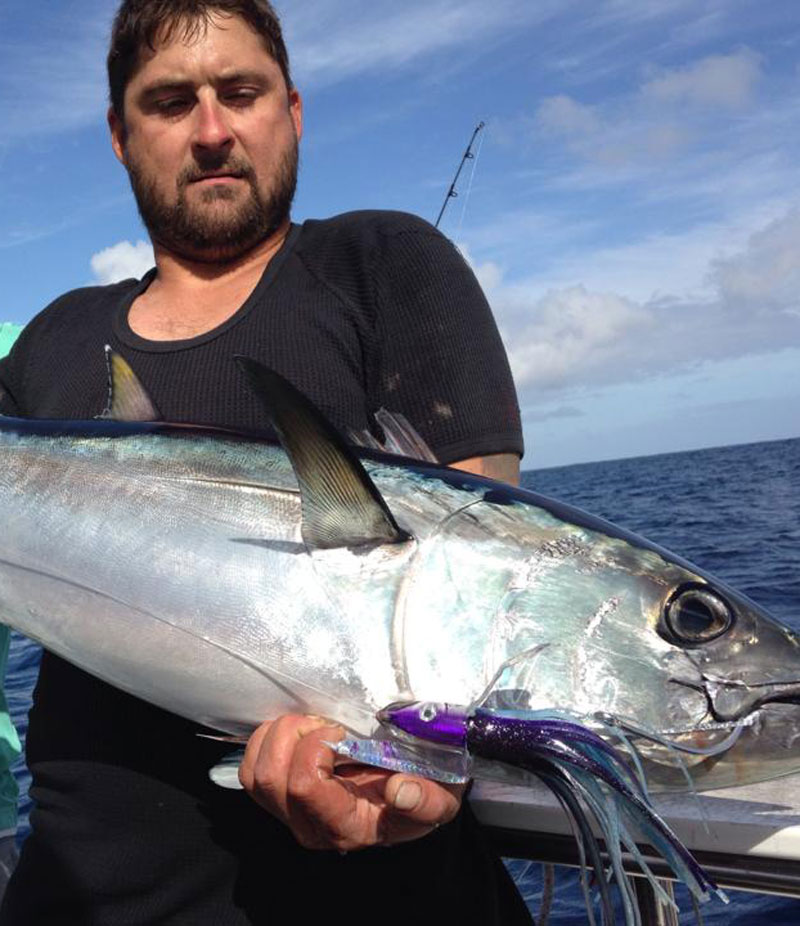 Processing the Tuna Once Caught

Visit this page for a full run down on how the highest grade export quality tuna is processed. Some people can take it a little too far but this is a good general guide.

Bluefin Tuna is perhaps best known for its use in Japanese cuisine however this fish is extremely good eating and rich in nutrition. Most commonly in Australia you will find ‘tuna steaks’ for sale (cross sections of the four loins which run lengthways along the fish). These are usually grilled or fried and sometimes sliced or crumbled into salads once seared in a pan.

In terms of japanese sashimi, different parts of the tuna produce a different grading of flesh. The most prized area due to its high fat content is the belly of the tuna just under the head near the organ cavity. This area is generally referred to as ‘toro’. The top portion of the fish is generally a darker red colour and has a lower fat content. This area is called ‘akami’.

Best eaten raw with grated wasabi and soy sauce, ‘o-toro’ is the fattiest part of the belly and is generally priced at about $6-10 AUD per slice (20g) for a high grade piece of flesh in Japan. The grading of the flesh is determined by the fat content of the meat. Samples are taken and analysed before a per kilo price is set in the Japanese fish markets.

Remember it is illegal to sell Australian caught tuna without a licence. 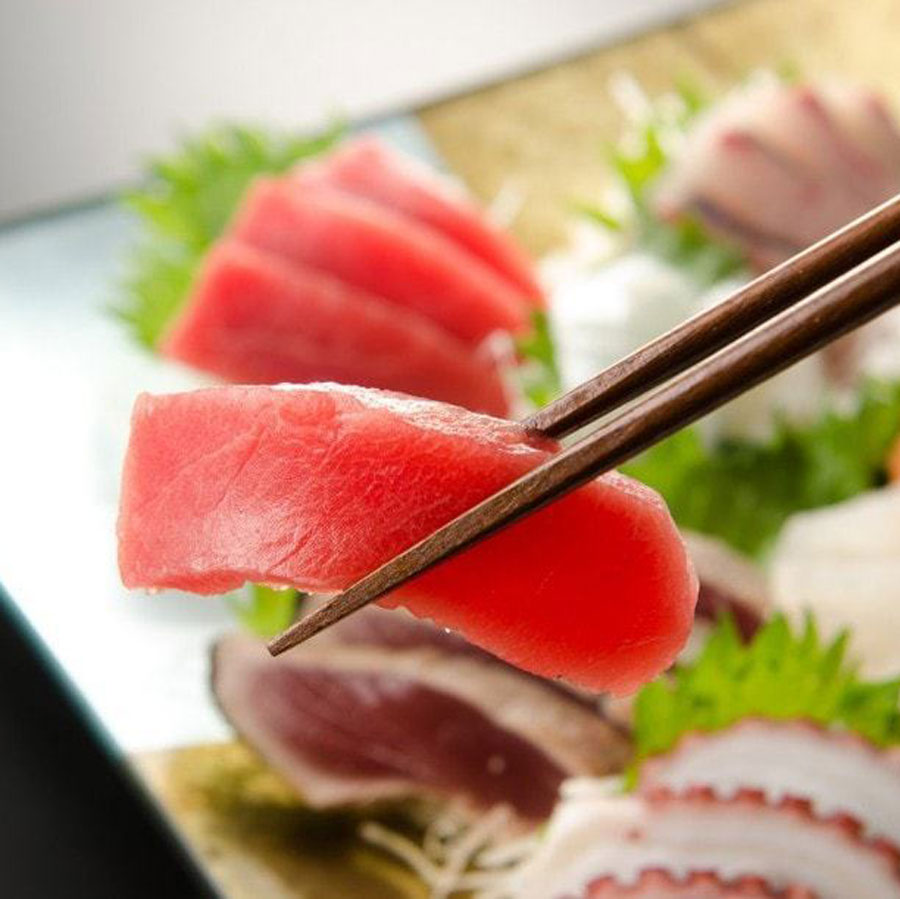