Above is a map of the Bagout Tuna Fishing Charter location and meeting point. All information will be sent to you when you book.

Please note that you will be required to obtain a Victorian Fishing License. More information is provided here: service.vic.gov.au

The 2021 tuna season is here. Don’t miss out on bagging a tuna this year.

Catching Tuna On Our Charters

With a 90%+ strike rate, it’s rare that we won’t catch anything.

Why Portland for Tuna Fishing?

Drive down to Portland and come out on the boat with some mates or join another group if there’s room. We’ll run the boat now, until the season winds down around August/September.

Forget the options at Apollo Bay, Warrnambool and Port Fairy. Portland is the best place to catch these magnificent fish because it’s so close to the edge of the shelf where the fish naturally congregate (see the map below). Less time is spend getting to the mark, and more time trolling. Definitely worth the extra drive time.

Get down here now and come fishing.

When to book a bluefin tuna charter?

Weekends and holidays always fill out quickly so it’s always best to book ahead as much as possible. Call us via the phone number on the website for the most up-to-date booking availability. Monday’s and Fridays are the next most popular days. Best value days are Tuesday, Wednesday and Thursday. We leave early in the morning each day and it’s a full day charter.

Will you catch a tuna on the charter?

If you come on our Portland fishing charter, you are almost guaranteed a fish. Typically our strike rate is over 90% for the boat. It’s rare that we won’t catch anything, but we can’t deny it doesn’t happen occasionally (we can’t control the weather or the fish’s mood).

In 2016, out of 45 charters, only 2 didn’t catch fish meaning we had a 95% strike rate. In 2017 it was 92%. Unlike other tours we only venture out when the weather is suitable. In fact we are often forced to cancel and reschedule some booked trips every year due to weather.

Typically the main school of Bluefin tuna pass by Portland around early April and thin out in numbers towards the end of July/August. However, 2016, 2017 and 2018 were all long seasons and tuna fishermen were catching even large tuna right up until October.

This migratory fish is typically caught in Australia’s southern waters from late March to July each year as they pass by the area on their annual migration around Australia.

Which Tuna do we catch?

The two main targets for our tuna fishing tour is Thunnus maccoyii aka Southern Bluefin Tuna  or SBT for short. We also catch Albacore tuna which are the species you are used to eating in your cans of tuna, but they are less common. Bluefin are the best fish to catch because they’re a great fighter (very powerful physical structure and metabolism). Also they’re a great tasting fish due to their fat content and red meat. They have an extremely powerful, streamlined body and their taste is renowned especially in Japanese cuisine.

How many tuna can you catch?

In Australia, there are strict measures that regulate the bag limits of Bluefin tuna fishing. Bag limits for recreational fishermen are 2 tuna per person per day. Regulations ensure this species is conserved for the next generation and every year the police and fisheries work together to fine people who ignore the law. For further reading about this fish click here

The best Bluefin charter in Victoria?

Tuna fishing charters in Portland vary considerably. There’s a huge difference between someone who will take you out on the water and a professional who will do everything they can to ensure you catch the fish you came for. We don’t compete with the cowboys of the industry because we only offer quality charters for people who appreciate the difference.

No expense is spared when it comes to your safety and making sure we find the best spots for fishing. We are fully qualified with a MASTER 5 and MED 3 on board our custom built charter boat.

This means we are licensed to travel up to 30 nautical miles offshore and together with the use of state-of-the-art fish finding equipment, we make sure you get the best chance of reeling in that big one. Also, we restrict the number of people on board to only 6 (plus the captain) with at least one rod trolling per person meaning you’ve got a very high chance of experiencing some action.

We’ve heard of some boats cramming 20 people on board and rotating turns.

Where is Portland, Victoria?

Portland is approximately 6 hours drive from Adelaide and 4 hours from Melbourne. It can be a great halfway point to get some action in after your Great Ocean Road tour or if you have the cash, you can fly to a nearby regional airport. Click here to read more about why we don’t fish in the waters around Melbourne to catch tuna.

Portland is renowned for it’s deep sea fishing tours but you can also catch tuna around Port Fairy, Warrnambool, Port Macdonnell and Apollo Bay, however the strike rate is usually lower. The image below (Portland is marked in red) shows why. You will notice the close proximity of the deep water shelf where the fish are caught. 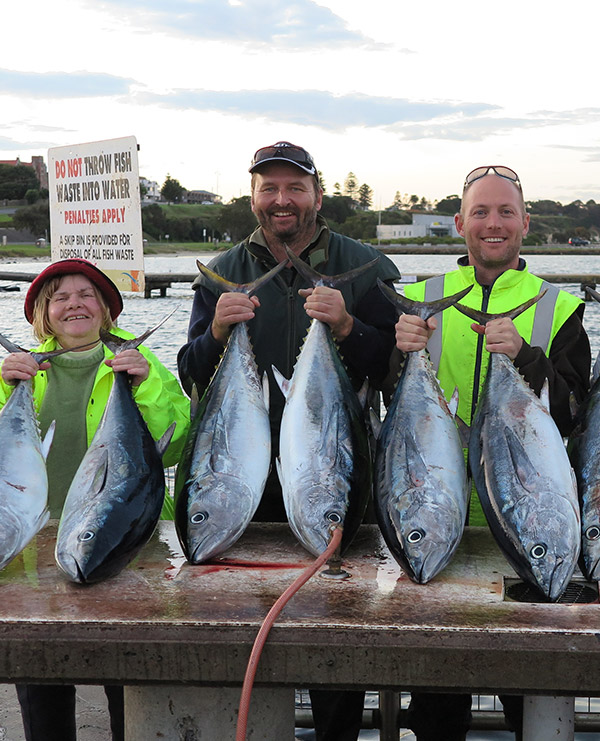 Safety First: We never take out more than 10.

Fishing trips in sync with the seasons. 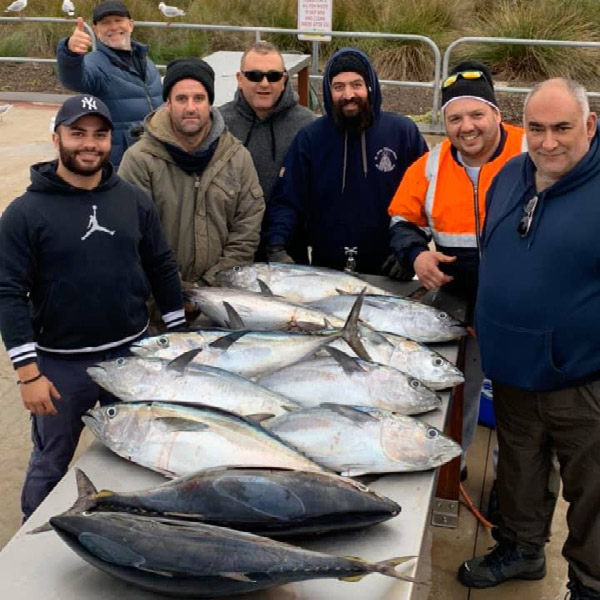 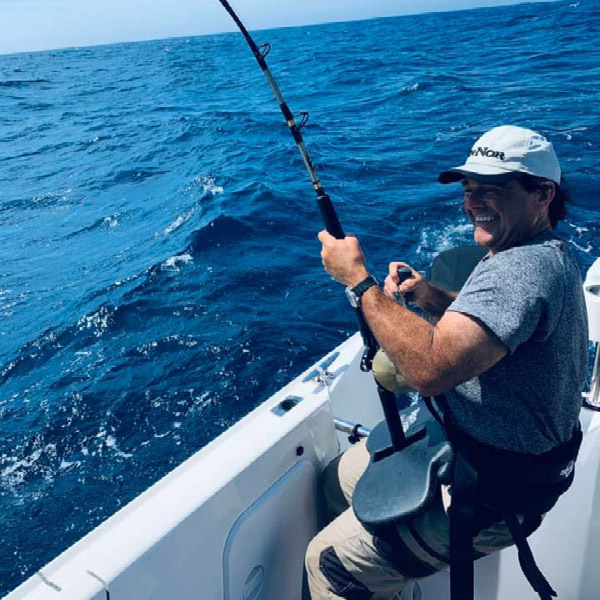 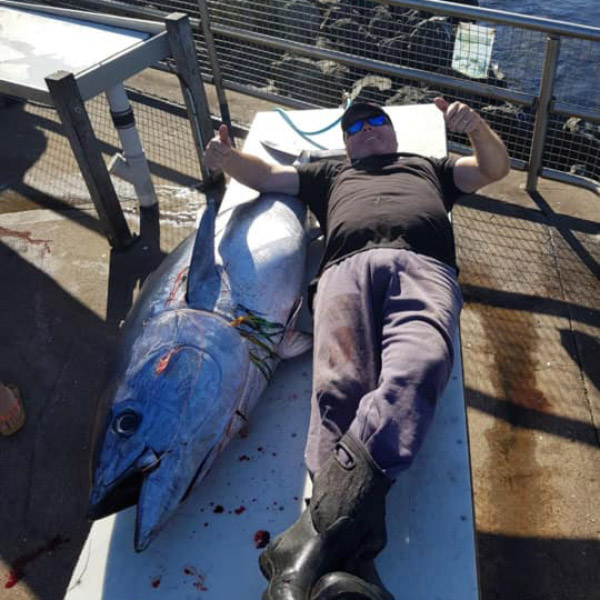 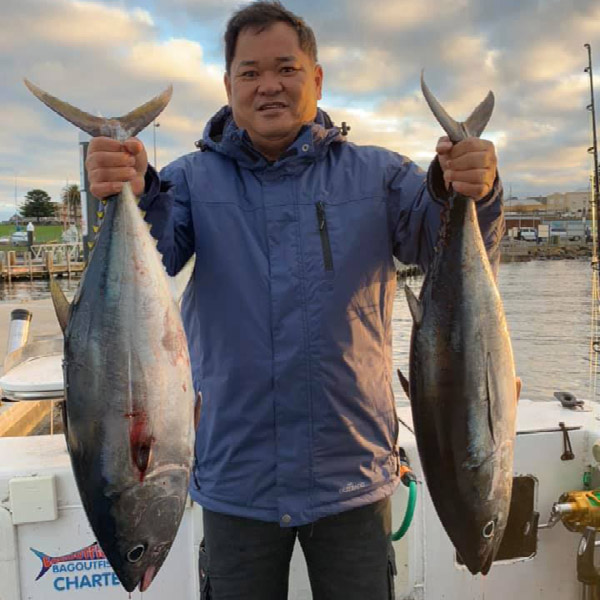